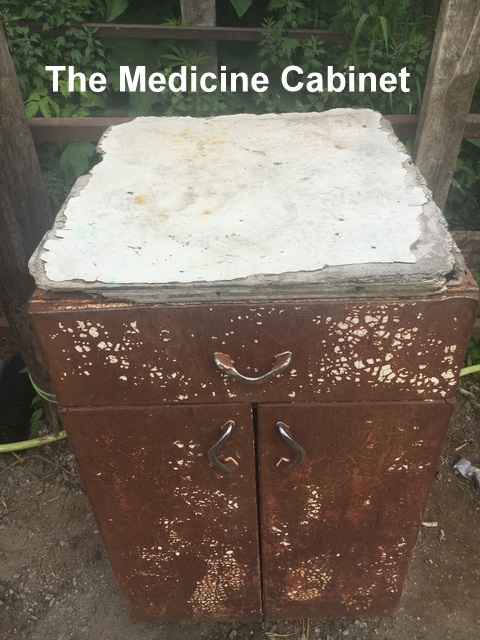 What does a Grassfed Beef producer keep in the medicine cabinet?

First a little background on this old relic.

This cabinet sat in my grandparents basement and was moved there from the farm when they retired. I have no idea before that, but I know it’s way older than I am.

It was painted white, and the weather has done it’s job to rust the metal cabinet down.

It’s one tough cabinet. Grandpa had lots of little screws, wire, and household repair things in it. When they moved to town, it was left behind. I thought it would be the perfect cabinet for out in the corral, next to our cattle chute. It wouldn’t fall apart as it could stand the weather, and a bit of wd-40 now and again should keep the hinges good.

I would have never guessed 16 years later I still am so greatful for this cabinet’s service.

The drawer holds the bands, banders, and a variety of extra tags, cull tags, ear taggers, castrating knife, ear notcher (pigs), and those sort of little things.  Small container of sugar, Wood pencils, rite-in-the-rain notebook, some miscellaneous bolts, sissors, measuring tape, plire, and such. I may hold my glass bottle meds in here while we are working with the animals, so they don’t get tipped over.

We use the top as a writing surface, as well as a place for a small cooler for refrigerated meds, and vaccines when we are using them.

In the house I have a shelf near the door for the disposible iv kit, lactaided ringers, banamine/ flunixin, nuflor, draxxin, multimin90, A+D+E, lute, more sterile gloves and sleeves, towels not washed with detergent, ACV, bute (horses), sulfa pills.

The drawer in the frig has the pen-g, and other cold stored meds/ vaccines. Most of which are probably well expired, as we don’t use them often.

Being certified grassfed doesn’t mean we don’t keep the basics on hand. I always go to my holistic medicine first, then to the other stuff for times that it takes more. The cull tags are important to have handy, as if an animal is ever given antibiotics, I can easily identify it by the tag.

We don’t use LA200 or LA300. I don’t like the painful welt it leaves on them. I’ve got so many other options in my cabinet, that those are just not needed.

We aren’t immune to trouble, but for the most part, we have 75% or more less than average. I can promise, I’ve seen most everything that can happen. I’ve learned to read the signs of trouble, and what I can let resolve on it’s own.

The cabinet has been such a great tool. I keep it rope tied to the fence, as my bulls and some cows think they should itch on it and have tipped it over too many times to count. The rope is loose enough I can slide it up to get access to the doors, and tight enough the animals leave it alone. Next to the cabinet we keep 2-4 4′ 3/8″ fiberglass fence posts. They are the only “sorting sticks” we have around. While we rarely need to use them, they are handy to use as an arm extension in our working alleys. Sometimes I wish they had a flag on them, but  It’s another tool that’s inexpensive, for the little they are used. In fact, a lot of the time they end up poked in the ground to use as portable fence with a twine string as the “wire”.